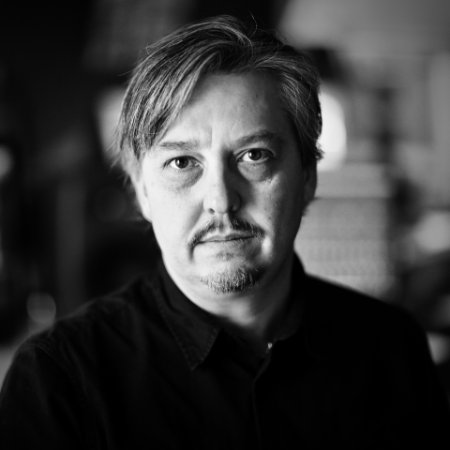 Alan D. Boyd is a media composer, producer, songwriter and fair to
middling guitar player who started in a punk rock band in the Canadian
prairies. Growing up he spent a lot of time listening to music and going
to the movies and thus developed a love across the genres.
Moving from Alberta to California and then British Columbia he spent
time at college and playing in bands before heading to London in 1994
where he still lives now. In London he spent time working between the
television & music industries traveling the world with bands and filming
productions when he was asked to start composing for director
Nicholas Copus.
Alan has composed for the BBC, the National Film Board of Canada,
Channel 4 and the Discovery Channel as well as a host of advertising
and corporate clients. His score to the BBC drama Day of the Triffids
was nominated for a best music award by Televisual Magazine.

In recent years he has also been teaching and delivering lectures at
music colleges in the UK as well as producing artists from his studio in
Kentish Town. He has garnered critical acclaim for releases with his
bands Little Sparta & St. Just Vigilantes and continues to create music
that invokes his love of cinematic scores and live performance.
Alan also creates music for various production libraries covering
genres ranging from Northern Soul to Cinematic Cues. He has also
undertaken creating trailer cues for Felt Music’s production library
working with the team to deliver unique and varied styles.
In 2013 Alan started work as director/producer on the feature
documentary film One More Time that tells the story of the London
session musicians of the 60s & 70’s through interviews and studio
sessions.
Alan is a member of BAFTA, PRS and The Musicians Union.