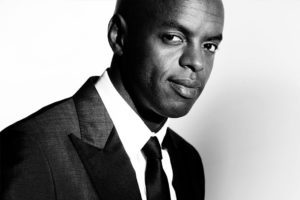 Trevor Nelson currently broadcasts across two radio networks. He presents weekdays, Monday to Friday 10:00am until 13:00 show on BBC Radio 1Xtra and presents a soul show on Wednesday evenings on BBC Radio 2.

In 2010 he was awarded with the special gold lifetime achievement award for his services to broadcasting, at the Sony Radio Academy Awards.

Furthermore he has won a MOBO Award as Best DJ, he has released seven compilation albums, worked on numerous BBC shows, and owns a residency in the worlds famous Pacha Club in Ibiza, the list goes on.

As a pioneer in the urban scene, Nelson started his broadcasting career at Kiss in 1985. A few years later Nelson became director of the station and daytime DJ. Behind the decks Nelson cut his teeth as a DJ with Soul II Soul and promoted numerous club nights including the now legendary Lick parties. With a stint behind the scenes in A&R at Cooltempo, EMI, Nelson was instrumental in the careers of D’Angelo, Mica Paris and Lynden David Hall.